RE604 tube amplifier - It has been some time ago that I wanted to build a great sounding amplifier as I noticed the book "Höchst Empfindlich" from Götz Wilimzig and Rüdy Gysemberg. The circuits I found there convinced me immediately and aroused my interest to build a new one. But as I figured out how much I’d have to pay for a RE604 Telefunken…I was appalled. Weeks later I discovered that the German tube RE604 also was also produced in Russia, named as УO186. Because of the fact that I’ve got some Russian language skills I started to annoy some fellas. Soon I realized that the market for this УO186 tube was scarce. Someday I get one – for 17 Euros – and started to collect the other parts.

Shortly a Mullard E180F arrived. However, the mail of a friend was the biggest bargain. He wanted to give away unnecessary output transformers TCC by Thoeress! One of the best you can get.

An old tuner should serve as a basic case. That’s how I’ve started:

Some metal work… and the case was perforated

My idea was to create the RE604 tube amplifier as “perfect” as possible. So I considered supplying the heating of the tubes with DC voltage – each tube should receive its own. I’ve placed the voltage regulator at an angle-shaped heat sink which also gives the case the necessary stiffening. Besides this, I used that project as an answer for a suffering question: Is a tube or a diode better (same direction)?

There was only one way to get the answer…Let’s try it out and construct both systems. The pictures below show 30Ampere large red switches, which are changing the voltage between tube and diode.

Another important thing for an amp is a stable and above all, a clean power supply. Here are the massive capacitors of the power supply.

The performances of the transformers are dimensioned very abundant. 180 watts per channel is required to produce 2.5 Watts of music. That’s almost insane.

The installation continues. Now it’s time for the huge output transformers. I estimated approximately 5kg each of them.

The capacitors and resistors of the power supply were installed, so that a first test could be made. As a rectifier tube I’ve used a AZ50 – Phillips MiniWat.

During commissioning, the voltages were ramped up very slowly by an autotransformer and were simultaneously monitored with sensors. Here a brief look at my little craft corner.

As the investigations -which took several days- were completed, I dedicated myself to the final assembly.

The exciting moment had come: Connecting the finished amp not only to the small workshop speakers but to the large living room system. In the meantime, I organized a “real” Telefunken RE604 for some bucks. 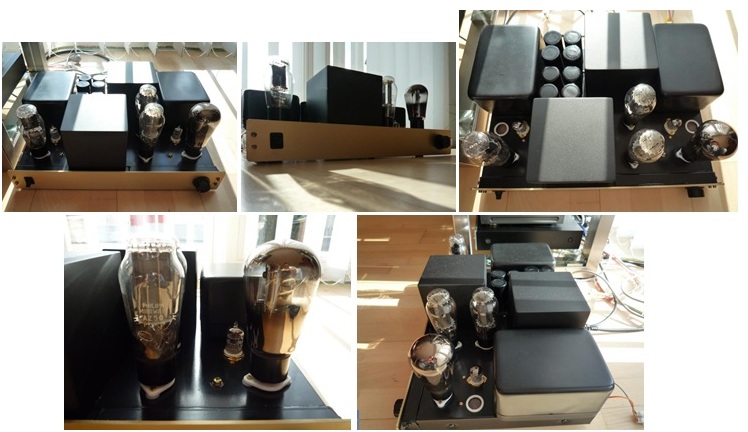 To be short: The sound was overwhelming - precise, melodic and just unique. The effort of the recent months has been absolutely worth it. Maybe a small point of criticism: The performance could be 2 watts more. While it is perfectly adequate to enjoy jazz or classical music, it unfortunately lacks of the “live feeling” listening to rock recordings. But that’s nagging on a high level ;) It’s a great device!

After the post was completed, an accident happened to me. While I was taking a closer look at the amp to give it the missing final touch, I unexpectedly touched the УO186 with tweezers. It was like an explosion. Luckily nothing happened to me. The shock was big and the worst thing was…I had no spare.

The used components which were used in this RE604 tube amplifier are summarized below: